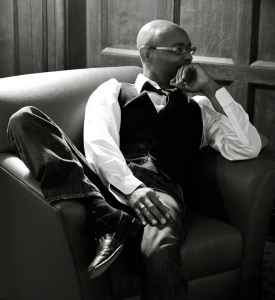 Damon has been dancing his entire life, starting with vernacular Jazz/Blues first taught to him at the tender age of six by his grandmother. After nearly a decade of learning at the heels of his elders, he went on and eventually studied a score of different dance forms until coming full circle in 1995 to focus primarily on the history and styles of Swing and Blues as his family danced them with a special focus on the Southern styles from the Mississippi Delta region. He has studied the development of vernacular Jazz/Blues dance across the United States learning from a number of the original dancers.

He is largely regarded as one of the foremost authorities on Blues idiom dance, a long time board member of the Northern California Lindy Society, former member of the California Historical Jazz Dance Foundation, and has been interviewed as a dance historian in documentary and for radio. Damon has been a featured instructor at camps, festivals, and workshops across five continents.

Here’s a video of Damon dancing at Bluesweet 2012 in South Korea.

Today, Grace teaches blues dancing at her home studio in Austin, and works to promote Blues dancing locally and regionally. She regularly teaches workshops across Texas and beyond with her partners Nick DeWitt and Tommy Schwegmann. Her teaching style is a combination of friendly, down-to-earth warmth and precise, technical breakdown. When she’s not teaching, Grace travels to compete in blues. Her recent accomplishments include 1st place wins at Nocturne’s Advanced J&J (NYC, NY) in 2013, Snowbound’s J&J (Rochester, NY) in 2013, European Blues Invasion’s J&J (London, UK) in 2014, and Mile High’s Strictly and J&J (Denver, CO) in 2015.

Here’s a video of Grace recently competing in Denver and grabbing 1st place.

One Response to "Instructors"

What do your think? We want to hear! Cancel reply

Who dances the blues?

Blues appeals to a wide variety of ages and audiences! We have people from all walks of life who share one major thing in common – a LOVE for blues music and dancing!! There is no “too old” or “too young”or “two left feet” in blues dance! We come together for the love of movement and music!

Join our newsletter and stay up to date on all the Burque Blues dance goodness and other related activities in New Mexico. You may also receive emails with special discounts or contests!

Our monthly lesson and dance will vary, stay in touch on FB and/or our newsletter!
%d bloggers like this: